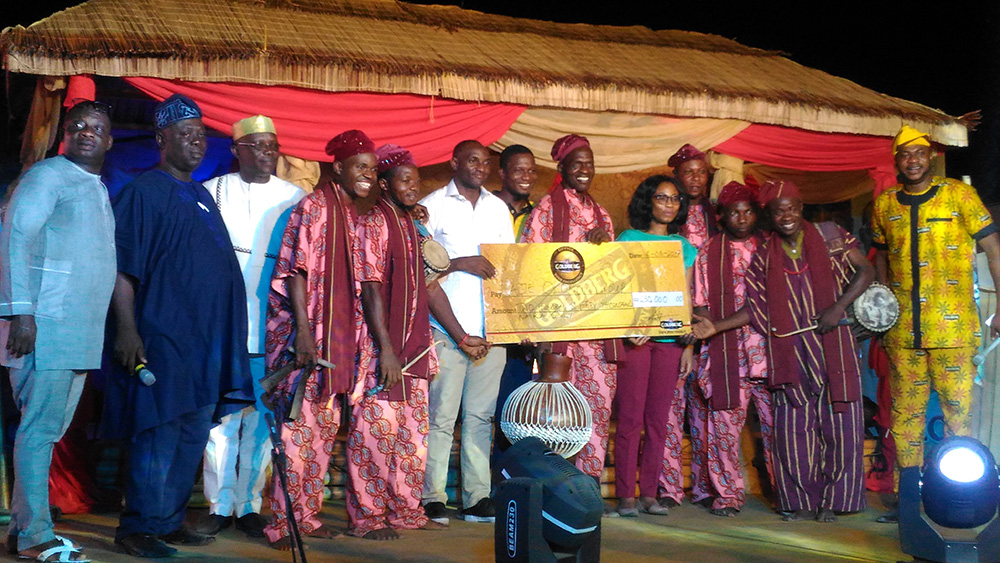 Aje Olokun Drummers from Ikare Akoko have emerged winners of the traditional drummers’ competition at the third edition of the Goldberg Excellency Tour held at Nicety Hotel, Ikare Akoko, Ondo State on Saturday, March 4, 2017.  The group outshone four other drummer groups at the grand finale to clinch the first position and the grand prize of Two Hundred and Fifty Thousand Naira (N250, 000).

The contest at Ikare Akoko was the third of the drummers’ competition in the ongoing Goldberg Excellency Tour, following the Abeokuta and Ilorin editions. The tour will visit Ado Ekiti in Ekiti State; lle lfe in Osun State and Benin City in Edo State in the coming weeks.

Eight groups auditioned at the preliminary stage of the competition on Friday, March 3, 2017 from where five groups made it to the grand finale.

The traditional drummers contest started with a procession through some streets of Ikare Akoko and it attracted a large turnout of residents who trooped to the venue of the contest to witness what they described as a new dawn in cultural rejuvenation among the Yourbas.

Speaking at the finale, the Senior Brand Manager, Regional Mainstream Brands, Nigerian Breweries Plc, Mr. Funso Ayeni, stated that the Goldberg Excellent Excellency Tour which is also scheduled for Ado Ekiti, Ile Ife and Benin City, is part of the brand’s effort strategic plan to promote the cultural values of the Yorubas.

He added that in line with the brand’s ethos, the successful event in lkare Akoko also helped to promote local talent, as the competition brought out the best skills from the performers who see the contest as an opportunity to showcase their talents and skills.

In his remark, the leader of the overall winning team, Mr. Ayanbisi Timothy, said it is a thing of joy to see his group clinch the first prize after dedicating much time for training on how to come up with the best performance. He also attributed his group’s victory to God’s special grace. “Though we practiced for quite a while for this contest, it would not be right if l do not acknowledge the work of God in all this,” he affirmed.

The Goldberg Excellency Tour is coming on the heels of the unveiling of Goldberg lager beer as “Your Excellency” in 2016 and it is in line with the brand’s unique credentials that places it in a class of its own in the market.

ESSENZA Spoils Attendees with Gifts at ‘Her Network...

Tiwa Savage Parties with Friends to Celebrate Being...