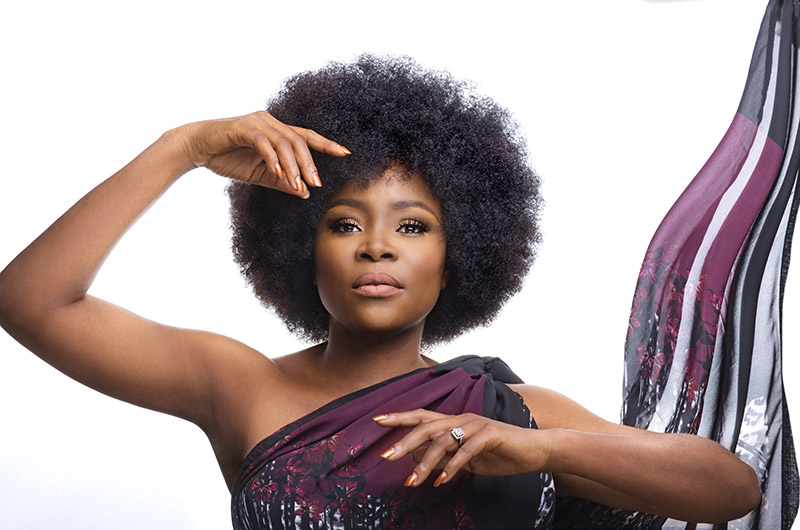 Spending time with the artiste known as Omawumi is like hanging out with your childhood friend with whom you have no airs and graces. It’s easy breezy conversations, laughs, swapped stories and a cheery energy. Her home is beautiful, clean and filled with family warmth as she comes down the stairs carrying her son. She immediately takes off her wig as she realizes the interview will only be recorded and not filmed.

We are greeted and offered refreshments as she excuses herself briefly to taste the soup being made by her sister. While the house itself is devoid of overtly personal knickknacks we are made privy to various aspects of her life in the flesh. Her children are tended to and coddled frequently throughout the interview and several times she goes to the kitchen to ensure family dinner is proceeding well.

With a new album on the charts, singer, songwriter, wife and mother Omawumi Megbele Yusuf invites Vanguard Allure’s LATASHA NGWUBE into her private world for an interesting conversation on her career right now and what’s next from the superstar.

You just released your third album ‘Timeless’. Tell us why fans, new and old, should buy it.

I put a lot of sweat into it. As a performer, I see myself as a minister and as such, I have to have a message. I have to give something back. I’m aware of the kind of musician I am as I have explored different genres and it came to a point where I felt as though I had to choose between the devil and the deep blue sea. I had to choose to either follow the trend people knew me by – happy-go-lucky “gingered” Omawunmi or follow the tenets of what is currently main stream.

I found that if I did that, I would not be true to myself and it is important to communicate sincerity in every word you say and move you make. Thus, as much as I would have liked to make this album with my audience in mind, I concluded that giving my audience ‘me’ would be more honourable. This is a grown-up Omawumi; the evolution of ‘me’, this is not me changing my sound as I’ve never conformed with what is main stream. This is ‘me’ going a little left because I have something to say; a story to share and with an understanding of how music should be. I needed to do this to add to the era of folk music, jazz music, nice and good music by the likes of Angelique Kidjo, Youssou N’dour and Salif Keita. I needed to do something to keep that pace.

Earlier in the year, you signed a new record deal with Cabal Entertainment which is affiliated with Roc Nation. Why did you choose to work with them?

Technically, it’s not a record deal. I have always been an independent artiste and I still am. I wanted a proper distribution platform because of the kind of music I’m currently making. Cabal is the facilitator, the channel through which I’ve been able to get my distribution with Universal and my publishing with Roc Nation.

Take us through your creative process. How does a song come to be from start to finish?

I also worked with another song writer, Sizzle Pro. I knew what I wanted to do before I started this project. Every song has a story; every song comes to me in a different way. For instance, with ‘Play Na Play’, the moment I ‘heard’ the song, I wrote the first verse and hook and at the same moment, I knew I wanted Angelique Kidjo on that song. I put a lot of time and effort into my music and as much as I would love to freestyle, as I do sometimes, I didn’t do that on this project.

It was a wonderful experience. There are a group of women I like to learn things from to add to my repertoire and she is one of them. She is one of my greatest mentors; she is energetic, believes in the truth of her music and is a successful well-grounded musician. Not everybody understands all the words in her songs but the message is in the power and tone of her voice. She has been able to keep herself relevant for so long and is a three-time Grammy award winner. I want to achieve and possibly surpass that. She represents Africa to the world in a way I would like to.

Is there anything hindering you from expressing yourself musically? Is there still any subject you wouldn’t sing about?

I drag my feet when a song has no message. The song has to be tailored to a cause: it could be about love, heart break etc. because I find it difficult to be vague. In one of the songs on the album, ‘The Matter’, I wanted to be vague. I sought to make the sound serious but with vague lyrics… It ended up being a serious song.

You’re one of the longest standing Glo ambassadors. What do you think has been your staying power?

The brand recognizes when you’re good at what you do so they tend to stick with you. I’m proud to be associated with Glo for this long because it is an indigenous telecommunications company. They’ve created employment and are one of the best networks, right now, because we are ‘the grand masters of data’. I enjoy their services and I take full advantage of them. I would even if I weren’t an ambassador. I’m really thankful for it.

You’ve been married for a little while now. How would you describe the relationship between you and your husband?

I’m married to my good friend, my brother, my lover and someone I learn from every day. It’s difficult to quantify; there are no men without flaws but we are in a good place and I am thankful for it.

How do you juggle marriage and parenting now that you have two children? How do you find balance?

People usually ask or say ‘how do you cope?’ I’m not really a fan of that word because you shouldn’t cope with something you enjoy doing. I enjoy being a mother as you can see my son is right here (he was) playing on his Ipad and I’m watching him. I know that somehow dinner will be ready when my husband comes home from work. It’s a wonderful experience and I’m grateful for the opportunity to be part of my children’s lives in the way that I am; I like this balance.

I don’t know how it would have been if I was always on the road. I thank God that I’m able to be grounded as a parent while achieving some level of success simultaneously.

Regarding your friendship with Waje, how important would you say female friendships are?

It’s not always easy to find someone like that; some people say you need a loyal person. I think loyalty is seriously over-rated. I think one of the key things that have kept us is: she’s not a wicked or two-faced person. We pray together; we like the same things and she’s my friend and my sister. When you have someone you feel you can communicate with, it’s always ideal to keep it close; don’t spread it.

Tell us something no one knows about you or something people would be surprised to know.

The reason nobody knows anything is because they are not supposed to know. When someone asks me to tell them something nobody knows, I begin to rack my brain; thinking, why I would want to tell anybody that (laughs).

I wake up in the morning, brush my teeth and say a prayer. The summer holidays are over now, so the children are back in school. I didn’t travel because I have a lot of things I’m working on alongside the music. I conduct or attend a series of meetings.

When I have the time, I go into the studio and at some point, during the week, I have my band rehearsal. I must rehearse every week or, at least, every other week. That’s pretty much my life.

How do you unwind?

I have my phases; they come and go but it’s mostly books and TV. Sometimes, I hang out with my friends but now I watch TV a lot. At some point, it was Yoruba films. That phase has gone; now it’s Indian films. I come back home, find an epic Indian movie, watch, cry and laugh with a nice glass of wine or whiskey; look in on my children. If the school session is on, I do their homework with them and assure myself that I still know long division (Ah, Omawumi, you still know long division o! Thank God o!).

How would you define your style?

Would you say your style is part and parcel of your music or are clothes just clothes to you?

They are just clothes. I like Ankara; it’s cheap and beautiful. I’m not the kind to give them full African; I westernize it a little bit. I’m currently focusing on my silhouette because a lot of people don’t know I have a decent figure. Some people say I ironed (surgically enhanced) my body. I don’t have any problem with body enhancement and if I wanted to do it, I would.

You have lovely skin. What is your beauty routine?

Exfoliate! Exfoliate! Exfoliate! Use sunscreen when you’re going out to avoid sun burns. Some black people don’t know that the sun can potentially harm everybody’s skin. I particularly love using natural products – ori (shea butter) and coconut oil. I use a sponge to exfoliate. Other than that, I’m blessed with good skin. Once in a while, I do a sugar scrub or Hamam. It’s never too early to use anti-aging products. I plan to start using them soon.

If you could give one piece of advice to anyone about anything, what would it be?

Be happy or try to be happy; happiness is a choice. Try not to bring anybody down in the process of finding your happiness. Nobody is getting out of life alive. Live life but don’t spend all your money because times are hard.

Fireboy DML: The Rave On Fire