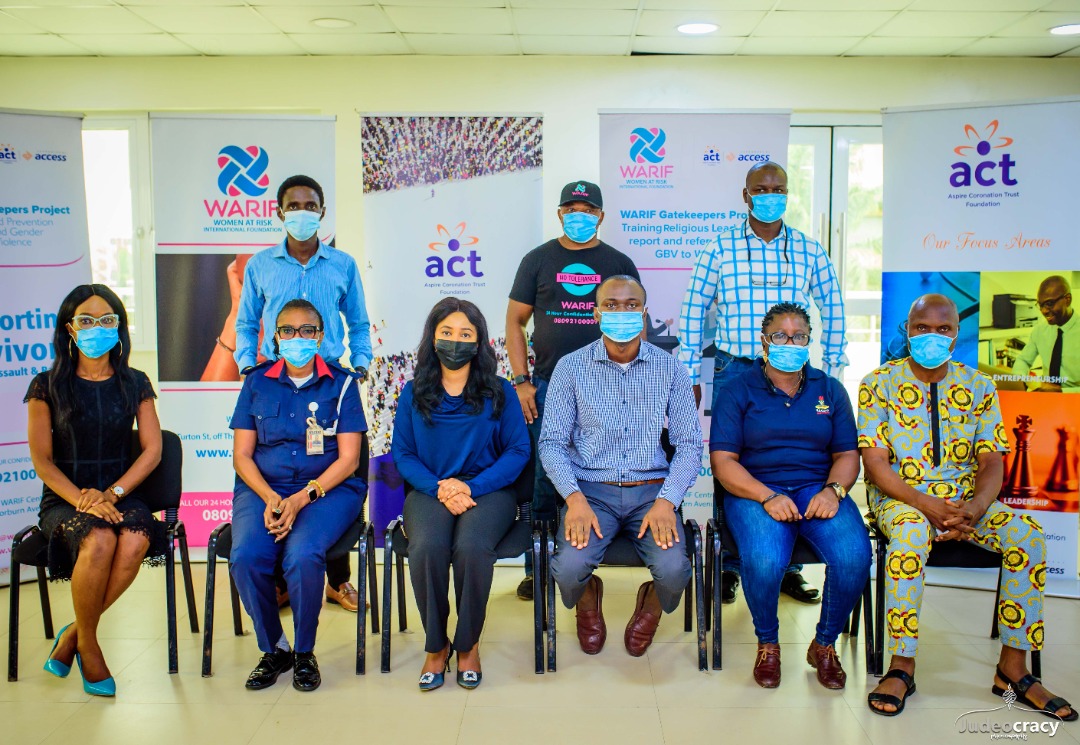 In its commitment to address the issue of Gender Based Violence in Nigeria, ACT Foundation has partnered with the Women at Risk International Foundation (WARIF) again this year, for the 3rd Cycle of the Gatekeepers Project, to train community gatekeepers who serve as first responders to cases of rape and sexual violence in their direct communities.

WARIF has successfully trained another group of stakeholders to tackle the menace of rape and sexual violence under its Gatekeepers Project. The project, supported by Aspire Coronation Trust (ACT) Foundation is in its 3rd cycle of addressing the prevalence of sexual violence among young girls and women in rural communities across Local Government Areas in Lagos. The participating community gatekeepers include Traditional Birth Attendants (TBAs), Law Enforcement Agents and Religious leaders. A total of 600 Gatekeepers were trained in this cycle of the project.

The addition of religious leaders as Tertiary Gatekeepers in the program recognizes their important role in their various communities, which will lead to an increased awareness and a reduction in the cases of GBV in these rural communities.

Speaking on the inclusion of religious leaders in this cycle, WARIF’S Founder, Dr Kemi DaSilva-Ibru noted, “following two successful cycles of the Gatekeepers community based project, sponsored by ACT Foundation, the involvement of community leaders such as the Traditional Birth Attendants and Law Enforcement Officers, has led to an increase in the awareness and the prevention of gender based violence in rural communities and a documented increase in the number of cases reported to the WARIF Centre. We anticipate that the addition of Religious Leaders, a key stakeholder in many communities, to our gatekeepers project, will lead to a further increase in awareness, a change in the adverse prevailing mind set of many community members towards gender based violence and a reduction in the number of cases of violence against women and girls reported.”Also commenting on the initiative, CEO ACT Foundation, Ms. Osayi Alile said: ACT Foundation is proud of WARIF for the successful implementation of the Gatekeepers Project “In the past year, this crucial project has continually pushed societal barriers to the safety of women and girls, through the training of key community members including the Traditional Birth Attendants. In this project cycle, the inclusion of the Police and religious leaders further strengthened WARIF’s approach to enabling a higher level of community awareness and ensuring that all aspects of society (grassroots, rural or urban) are equipped with the capacity to appropriately and tactfully help women who are disposed to abuses.”

Ms. Alile also noted that as incidences of rape and sexual violence continue to rise, ACT Foundation is committed to the support and protection of vulnerable women everywhere and therefore hopes to continue supporting projects that challenge the tragic menace of gender-based violence in our society. WARIF through its various initiatives in health, education and community service, remains committed to ensuring that all women and girls can live in a society free from rape and sexual violence.