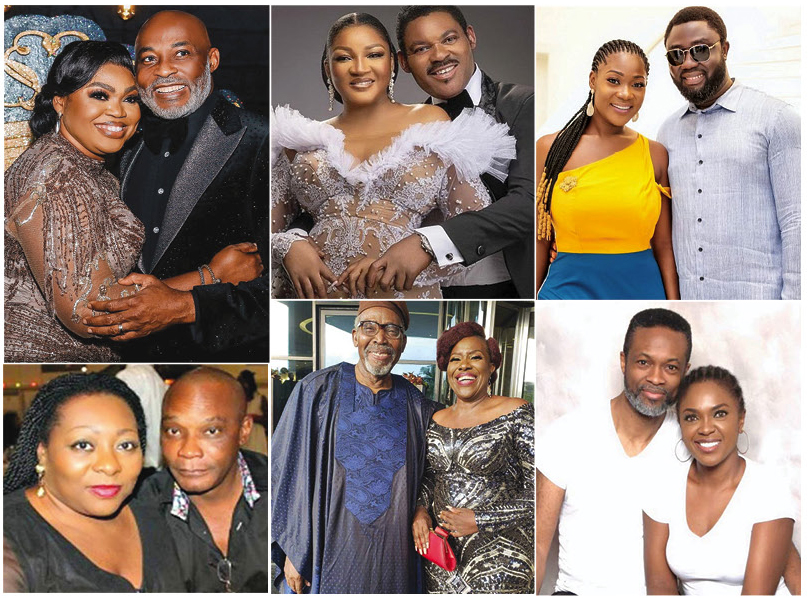 For every marriage that burns and fizzles out quickly, there is a famous celebrity couple that seems to be in it for the long haul. Despite all the menaces associated with celebrity unions, there are still a couple of them, especially in the movie industry, who, have gotten a hang of their relationship, are enjoying blissful marriages.

Still, in the spirit of Valentine, we celebrate some of the Nollywood celebrity couples, whose marriages have endured and who, remain an inspiration to the rest of us. 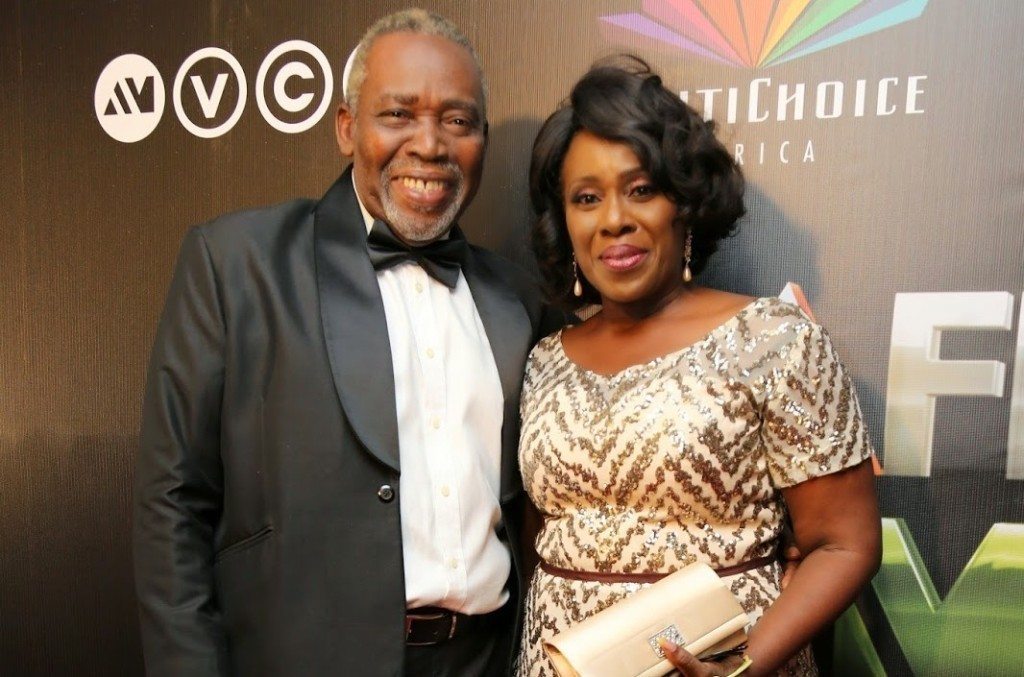 Olu and Joke Jacobs
This Nollywood power couple has been married for over 30 years, and still going strong. They met in the 80s on Olu Jacobs’s return to the country from England. In an interview with a major newspaper, Olu Jacobs had said that the moment he set his eyes on Joke Silva, he knew she was his wife.
He said, “We were having a management meeting for a play, Wole Soyinka’s Jero Metamorphosis when a young lady walked in. Immediately she walked in, something inside me told me that she was going to be my wife and I told the people around me that I was going to marry her. That was in 1981. In 1986, we got married.
Since then, the couple has been inseparable. They have blessed our screens with their talent, starring either as a couple or antagonists, in a variety of notable films over their impressive career. They are the oldest couple in Nollywood and have successfully debunked the myth that celebrity marriages never last. 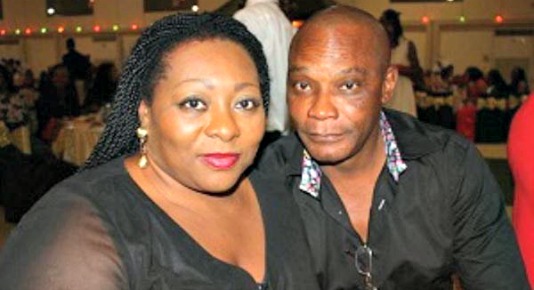 Gloria and Norbert Young
The love bug bit these two at the audition of Gloria’s first movie, Glamour Girls, where Norbert was also a member of the movie cast. The Veterans, Gloria and Norbert Young who got married in 2002 and celebrated their 18th marriage anniversary last year, are one of the oldest celebrity couples in the Nigerian film industry. While they live a drama-free and rather private life, their love for each other is pretty obvious. Gloria, who shot into the limelight by playing Doris in the movie Glamour Girls, has hinged her stable marriage on friendship, her husband’s sense of humour, maturity, as well as understanding, and her playfulness. According to her, though their marriage had its ups and downs, they always found a way around resolving their differences. On his part, the actor, famous for his diverse roles in TV sitcoms says his wife is a quality human being and is very resourceful. “She is beautiful and very helpful. She is my friend.” These two accomplished actors have continued to remain relevant in the industry while demystifying loveless celebrity marriages and breakups in Nollywood. 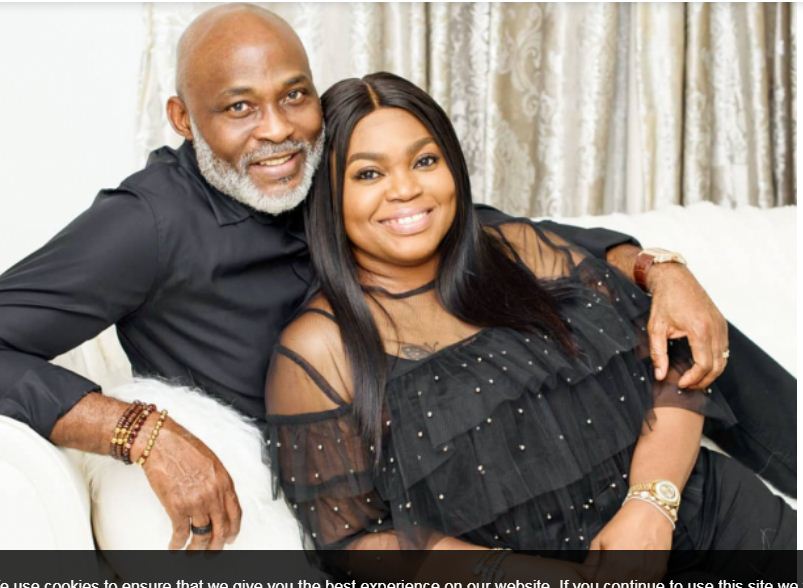 When TV star girl, Jumobi Adegbesan hooked up with the hottest bachelor in Nollywood, Richard Mofe-Damijo, not a few thought the relationship would see the light of day. Twenty years down the line, the lovebirds who got married in the year 2000, and are blessed with four children, are not only together, but waxing stronger in their love.

The Veteran actor who has starred in a variety of notable films over his impressive career, has in recent times, flaunted his love for his wife on his social media handle. The legendary actor has reiterated often that he owes his wife a debt of gratitude because she took a setback for him when they got married. “She was already a television personality people love and she could have been anything she desired to be, but she said to me, I am going to stop, get met a regular job, I don’t want to be a celebrity and I said why, she said one person in the family is enough, you stay there and do your thing, and let me take care of the home front.” He wrote on his Instagram handle.

“If that is not love, at the highest level of personal sacrifice then, I don’t know what it is, and so you can’t have a partner like that and you won’t step up in things you do. And, I am far, far, far from being perfect, but blessed with an almost perfect wife that would do anything for me.”

His success as a father and career-wise he says, is just because he’s blessed with an amazing wife. 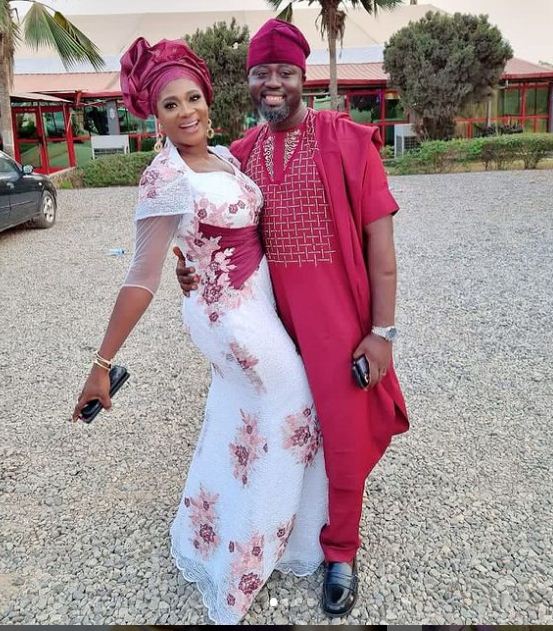 Mercy and Odi Okojie
Not many gave Nollywood star actress, Mercy Johnson’s marriage to Prince Odi Okojie a chance, back in 2011. Her marriage to her heartthrob then was immersed in so much controversy that almost ruined the actress’s thriving career.
Ten years on, however, the Nollywood superstar and her husband remain devoted to each other and have become the envy of many. The flame is still going strong, as recent photos of their 10 years anniversary prove.
While celebrating their 10th year anniversary in 2021, the actress took to her social media handle to reaffirm her love for her husband, saying she would walk the path with him over and over again.
If you are wondering why their love is growing stronger as they get older, Mrs. Okojie stated that their marriage has been 10 years of grace, love, forgiveness, understanding, sacrifice, tolerance, patience, respect, and friendship.
The marriage is blessed with four children. 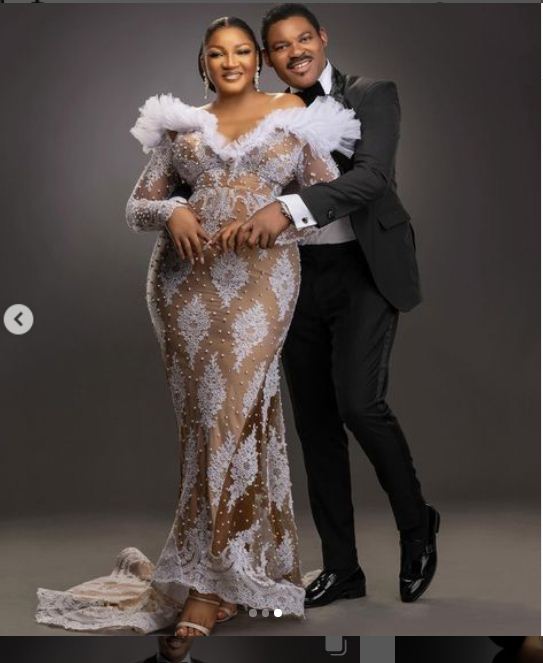 Omotola Jalade met her husband, Captain Matthew Ekeinde, in 1994 at the Solid Rock Church, Iyana Ipaja, while she was just 16 years old. They got married two years later in a court ceremony in 1996. They later had the most talked-about white wedding ceremony, conducted on board while flying from Lagos to Benin in 2001.  Years in the spotlight haven’t come between the Nollywood A-list actress and her pilot husband, with whom she has four children. For 25 years now, Omosexy as she is fondly called has been able to hold her family together without many scandals. In recent years, the talented actress has been showing off her husband and children on social media to the admiration of her fans and followers.

Last year on March 25th, the couple celebrated their 25th wedding anniversary. The mother of four posted some lovely photos and penned these words to her husband.

The couple is no doubt a strong support system for each other and has given us reasons to believe in love. 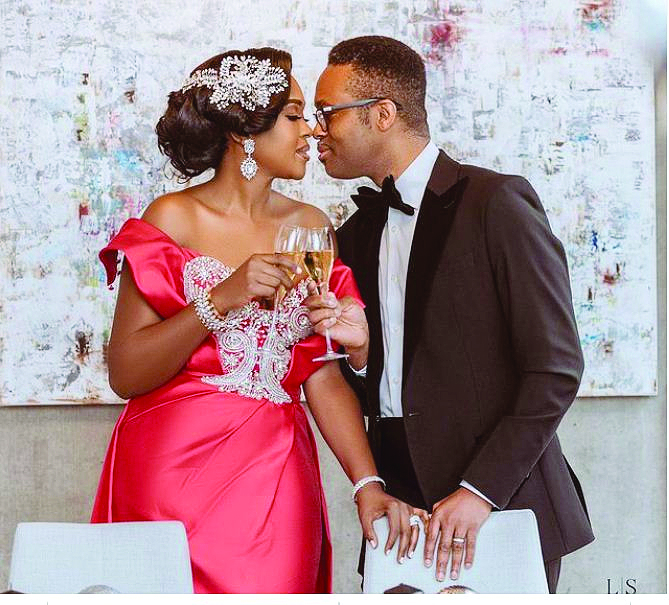 We have always admired star actress and producer, Omoni Oboli and her husband Nnamdi. They share some kind of facial resemblance and come across as siblings rather than husband and wife. While she may be successful in her career, she has equally drawn attention for being one of the celebrities who have proven that a celebrity marriage can last long. Omoni met her husband, Nnamdi Oboli, at a movie location in 1996. The pair got married in 2000, four years after they met: she was only 21 years old while her husband was 29. The rest, like they say, is history.

Twenty one years on, blessed with three sons, Gozi, Chizi, and Tobe Oboli, the couple has continued to grow stronger in their marriage and love for each other.

So what is the secret of this lasting love?  While chatting with an online platform, Omoni revealed that from the onset, she and her husband decided that divorce was not in the cards. She noted that their resolution was borne out of the fact that no sin is unforgivable. It’s a person who decides whether or not to forgive an erring offender. Nnamdi has been supportive of his wife’s career and also doubles as her manager. He is also a producer and has co-produced with his wife, blockbusters such as; Being Mrs. Elliott and Render to Caesar. While celebrating their 21st-anniversary last year, the actress took to her social media handle to reaffirm her love for her husband and commitment to their marriage.  The union has continued to be a source of inspiration to young and aspiring couples.